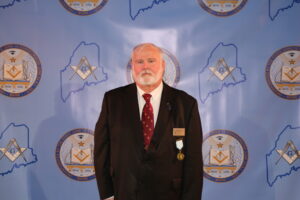 RW Audie Gould was raised on May 10, 1986 at Lynde Lodge #174 in Hermon, Maine and he affiliated with Seminary Hill Daylight Lodge #220 in 2014, where he currently serves as Senior Warden.  He served as Master of Lynde Lodge in 2013, 2016, and 2021.  In 2019 he was appointed as Grand Lodge Steward.  He has served as District 6 District Deputy and Ritual Instructor.   He is currently the Masonic Service Association Representative to the Bangor Veterans Home.  He received the Newell Perry Award and the Master Builders’ Award. In 2020, he was awarded the Josiah Hayden Drummond Award by MW Mark Rustin for his service to the community.  Audie has coordinated the ordering and distribution of the Bikes for Books program for numerous lodges in Central and Downeast Maine for the past several years.  He has been instrumental in Lynde Lodge’s free public Thanksgiving Dinner for the past 13 years.

Audie lives in Hudson, Maine with his wife of 50 years and their Retrievers.  He has two adult children and 2 grandchildren.