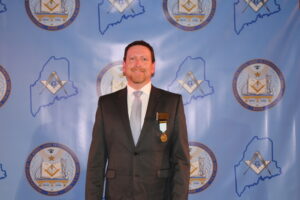 Scott was raised on April 24, 2003 at Governor William King Lodge, #219, in Scarborough, Maine. He served as Secretary of the lodge from 2005 to 2013. He has been a part of the lodge’s community betterment programs, which currently include an annual Toys for Tots drive and the Bikes for Books program. In 2011, Scott became the Treasurer of the Maine Masonic Charitable Foundation and in 2012 also was elected to the office of Grand Treasurer of the Grand Lodge of Maine. In 2015, Scott was fortunate enough to receive the Josiah Hayden Drummond Distinguished Service medal from M. W. David A. Walker in recognition of his service to the fraternity.

Scott owns a company called August Wealth Management, LLC in Portland, Maine where he is an investment adviser and financial planner. In 2008, Scott became a Certified Financial Planner™ in order to better serve his clients. Scott has also been a youth baseball coach, donated to various non-profit organizations, and served for six years on the board of directors of the Center for Grieving Children. At the Center, Scott spent three years as a co-chair of the annual auction and gala and sat on the finance committee. Scott lives in Scarborough with his girlfriend Melissa and their four kids.