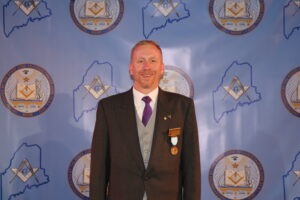 Brother Scott Walton was born in Stuart, FL before moving to Caribou, ME at the age of 10.  He graduated from Caribou High School and attended college at the University of Maine at Orono.  Scott spent 17 years working for a local beer and wine distributor which included managing all large format business.  In 2018 he became the Property Manager for OHI, a local nonprofit that supports people with intellectual disabilities and mental illness.

Scott is a second-generation Mason and was raised at Caribou Lodge #170, while his father Duane conducted him through his degrees as Senior Deacon. He affiliated with Ralph J. Pollard Lodge #217 and served as Master there in 2018.  He remains active and also serves as a trustee on the Building Association.  He is a member of the Scottish Rite Valley of Bangor. In 2019 Scott was appointed Grand Marshal by M.W. Mark E. Rustin.  He was elected and installed as Grand Secretary in 2020.  Scott enjoys riding his motorcycle to help promote charity with the Widows Sons of Maine and has helped form two of the ten chapters within the state.

Scott lives in Holden with his wife Lacey and their sons Mason and Colby.