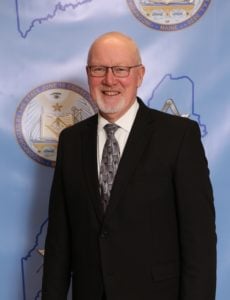 Brother Daniel Bartlett was born and raised in Central Massachusetts, one of two sons of John and Judith Bartlett. He worked on a dairy farm as a youngster and at a local plastics manufacturing plant during high school. He enlisted in the U.S. Coast Guard following graduation and served for the next 22 years on board a variety of units including cutters, search and rescue stations, support bases, a marine safety unit and a light house. He retired from the service in March 2001 at the rank of Senior Chief Petty Officer. Dan then worked for Hinckley Yacht Service in Southwest Harbor as a Systems Technician until 2015.
Dan was raised in Tremont Lodge #77 in Southwest Harbor in June 2000. He served as Worshipful Master in 2007 and 2008; President of the 21st District Officer’s Association; was appointed by M.W. Brother A. James Ross as District Deputy Grand Master of the 21st Masonic District from 2012 to 2014 and was elected and served as Grand Secretary of the Grand Lodge of Maine from 2016 to 2020. He is also a member of the Scottish Rite, Valley of Bangor and the York Rite bodies. Dan has also been a member for many years of the U.S. Coast Guard Chief Petty Officer’s Association.
Dan has two daughters, Danielle and Courtney and each of their families who are in the greater Portland area; and two stepsons, Mark and his family in the Portland area and Patrick and his family in the Ellsworth area. Dan and Susan make their home in Bucksport with their West Highland Terrier, Jack Frost and occasional visits from their six grandchildren.
Dan was elected and installed Deputy Grand Master of the Grand Lodge of Maine in May 2020.